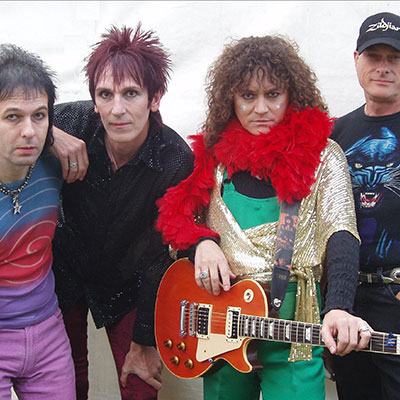 To watch T.Rextasy in concert not only demands stamina, but also a healthy pair of lungs to sing along to the rocking numbers that made Marc Bolan the leading force of Glam Rock. After the initial impact ofT.Rextasy’s stage presence, and the lead singer’s uncanny resemblance in voice and looks to Marc Bolan, you know that you’re in for an evening’s worth of Bolanic hits, played to perfection and with incredible enthusiasm. T.Rextasy play for their audience and most of them obviously want to hear songs they know and love. Therefore, the band always include T.Rex’s Top 20 hits such as: Metal Guru, Jeepster,Telegram Sam, Hot Love, Children of the Revolution, Ride a White Swan, Get it On, I Love to Boogie, New York City, The Groover, Solid Gold Easy Action, and 20th Century Boy. T.Rextasy are more than just a tribute band, they are ultimately…

“The definitive T.Rex experience of the 21st Century”