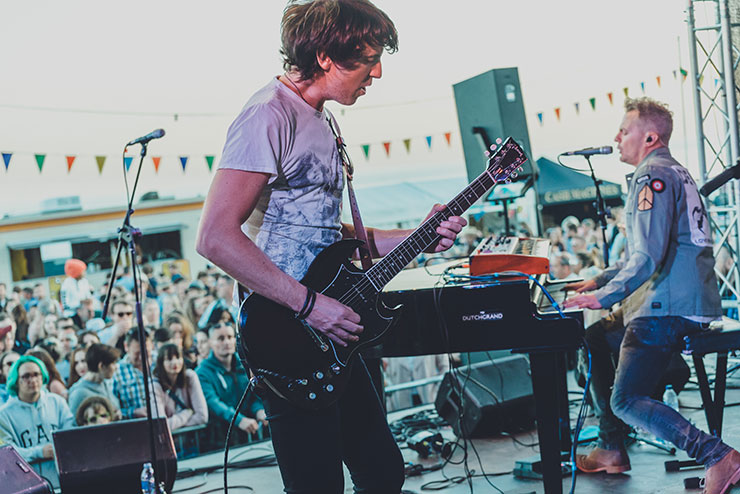 The band are pleased to announce the release of first single from their forthcoming album ‘Seeing Stars’.

‘Roll with the Punches’ was produced by Andy Green (Keane, Scouting For Girls) who worked with the guys on previous release ‘Turn It Around’ and is available for download.

The band has sold over two million albums with a string of top 20 chart hits home and abroad. The band’s debut album, Onka’s Big Moka, produced the global hit “ http://toploaderofficial.com/.

Since forming in 1997 Toploader have over two million album sales to their name and a string of top 20 hits both home and abroad. Their debut album ‘Onka’s Big Moka,’ sold over one million copies and remained in the Top 5 of the UK album chart for over six months earning them 4 Brit Award nominations.

In 2000 the single ‘Dancing in the Moonlight’ became a global hit spending over a year in European Airplay Charts transforming Toploader into a house- hold name. In 2013 the same track re-entered the Top 40 for three weeks, an incredible thirteen years after it was first released, cementing it as one of the biggest songs of recent times.

Their second album ‘Magic Hotel’ reached number 3 in the UK Albums Chart and saw Joseph Washbourn (singer), Dan Hipgrave (guitar), Matt Knight (bass) and Rob Green (drums) embark on the biggest tour of their careers playing to over 100,000 people in the UK alone.

In 2013 Toploader released two singles ‘Turn It Around,’ co-written with Eg White (Adele, James Morrison) and produced by Andy Green (Keane, Scouting For Girls) and ‘This Is The Night,’ produced by Tim Bran (London Grammar). Both tracks were excellently received by the press and gained strong support with BBC Radio 2 with placements on the ‘A’ Playlist. ‘This Is The Night’ gave them their first No.1 in the Radio 2 Airplay Charts.

With a reputation as a genuine crowd pleasing live band Toploader have backed the likes Paul Weller, Robbie Williams, Noel Gallagher, Tom Jones, Simple Minds and Bon Jovi, where they became the last British band to play the original Wembley Stadium. They have also appeared at a host of festivals including Glastonbury, V-Festival, T In The Park and Chris Evans’s Carfest.

Join us for Toploader’s new material on their highly anticipated 4th album ‘Seeing Stars’. Due for release in early 2017, tracks include ‘Roll With The Punches’ and ‘Boom Song’.