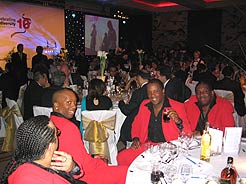 The Drifters (Vic Bynoe, Patrick Alan, Peter Lamarr and Rohan Delano) performed at Tony Blair’s Farewell party on the 20th of June 2007, at The Plaza Riverbank Hotel, London. Hosted By The Right Honourable Keith Vaz MP.
A delightful meal of various Indian Dishes were served whilst traditional dancers took to the stage. Cherie Blair made her way through the audience and sighted The Drifters, Drifter Patrick Alan was honoured with a quick peck on the cheek.
The event was celebrating diversity and 10 years of achievement of The Right Honourable Tony Blair MP, the youngest Prime Minister of the 20th century, and the longest serving Labour Prime Minister the party has ever seen.

14 years ago in News
Comments